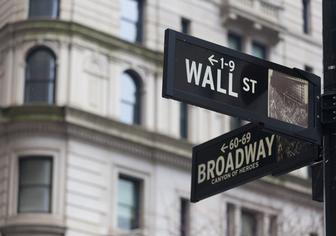 Ping An rapidly expanded in the early 1990s, but not without financial and corporate governance challenges.

There is a saying in China, 摸着石头过河, that translates to “cross the river by feeling the stones”. It is generally attributed to former Chinese leader Deng Xiaoping, who used it as a metaphor to describe China’s approach towards the reform and opening (改革开放）, which was launched at the end of the 1970s. On one side of the river was China’s closed, Marxist, centrally planned economy. On the other was an open, liberalized, market-driven one with Chinese characteristics. The saying goes: China hadn’t crossed this river before, and so would need to do so slowly, thoughtfully and carefully, by feeling the stones.

Peter Ma, the founder and chairman of Ping An, took the view: “If you want to cross the river, use the bridge, its quicker and more efficient and you don’t have to get wet.”

From 1992 to 1994, Ping An was actually driving a high-speed train in transforming its business operations. It was entering the life business and expanding operations to become a national brand in China. To continue to grow and develop at the same pace, the hungry Ping An needed more capital, more talent and more international best practice.

Ping An had been expanding its business into five special economic zones and 14 cities along the coast. The life insurance business was hungry for funding as Ping An started the individual life insurance business in 1994, which had shown a tremendous surge in market demand. Soon Ping An was stuck with a shortage of capital and a lack of experienced management talent. One answer to these obstacles was Wall Street – Western investment. 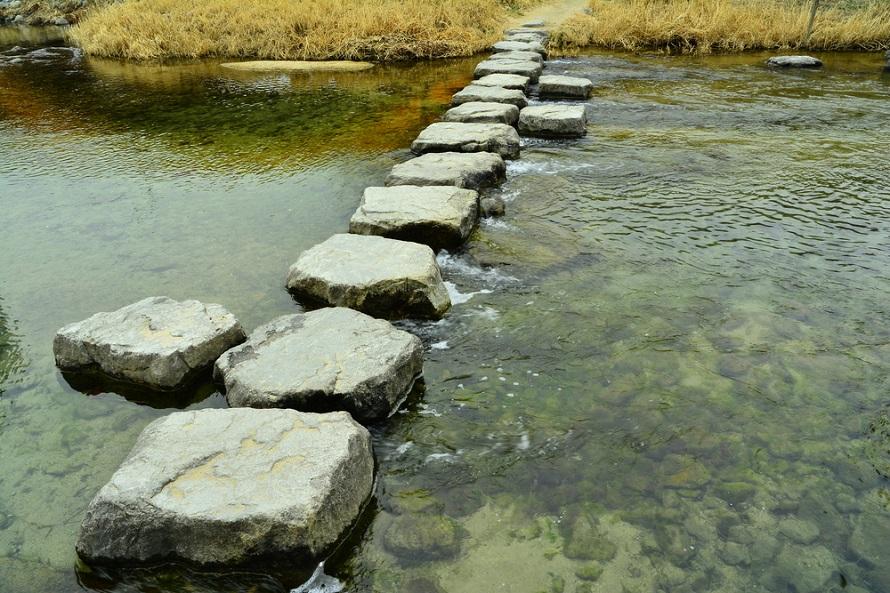 In May 1993, Shenzhen's municipal government the Shenzhen Lychee Festival to attract foreign investors. At the festival, Peter Ma met the executive directors of Morgan Stanley and Goldman Sachs.

After talking with Peter Ma, the two Wall Street giants saw excellent prospects in the insurance industry in China, and they were interested in investing in Ping An.

However, Ping An was not too confident as it was small and its insurance product range was not comprehensive. Ping An was surprised that the two investment banks were willing to use six times the price-to-book value in buying Ping An's shares, which reflected the banks’ long-term vision in the insurance company. 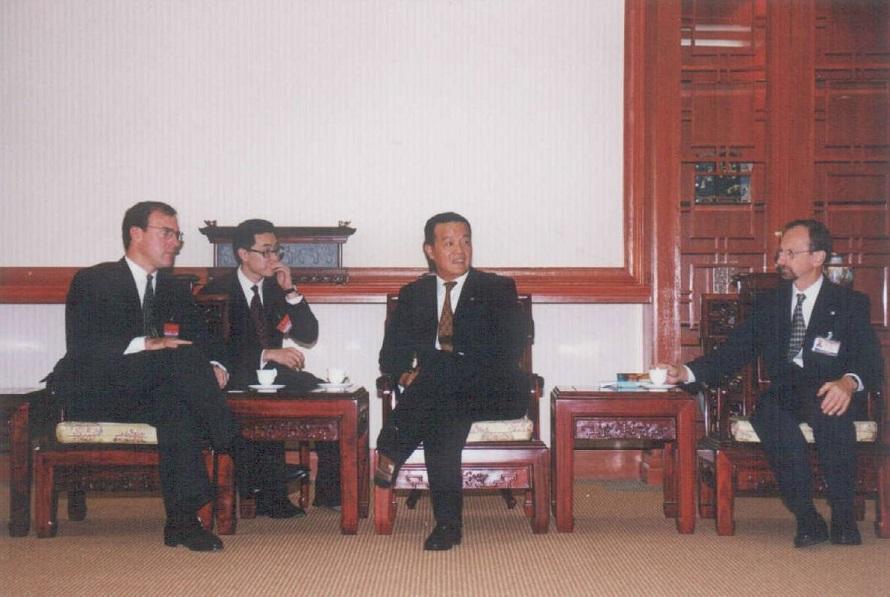 So rounds of negotiations began at the Shenzhen Shangri-la Hotel, day and night. Sun Jianyi, the Senior Vice Chairman, got home very late each night and cycled to the hotel very early the next morning to continue the discussion.

In the end negotiations ground to a halt. The parties could not agree on where the seat of arbitration for the deal would reside. The Wall Street giants picked the Hague. Ping An picked China.

After another 24 hours of non-stop negotiations, neither side was willing to give in. The deal was going to end with nowhere to go. Mr. Sun suggested to go to yum cha (brunch) together for the closing of discussions. The banks agreed.

"There is no right or wrong on how this negotiation ended. It is just a matter of cultural difference," Mr. Sun summarized it in the restaurant. "When Chinese couples are preparing to get married, they don't talk about pre-marriage property because it is two families bonding for a more fantastic future. In Western countries, couples sometimes have the custom to do property notarization before getting married. This can protect them from any unnecessary disturbance when they separate."

Mr. Sun further explained his interpretation of this negotiation.

"We are confident we can build an excellent future partnering with Morgan Stanley and Goldman Sachs, " he said.

After consulting their respective head offices in New York, the banks reported back that the negotiations could continue. The talks had reached a turning point.

The two banks decided to invest USD50 million in Ping An, giving each 5% of the company. The negotiation team of Ping An rushed back home to change their clothes, then went directly to the place of signing of the agreement. The contract for the cooperation was exchanged on May 4, 1994 at the Great Hall of the People’s Republic of China. 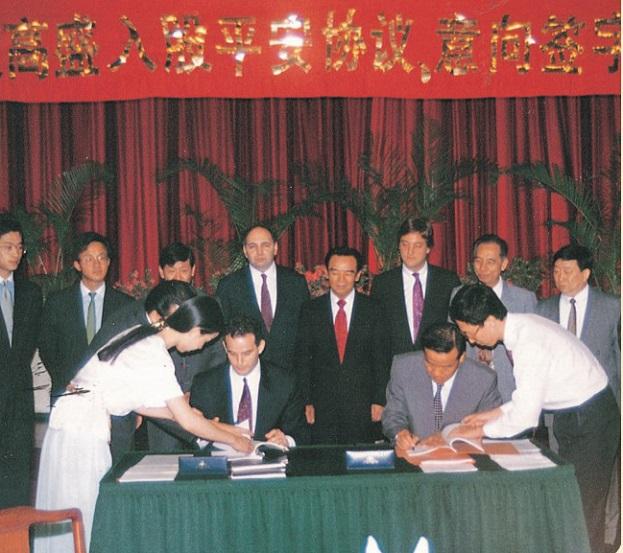 The investment was a bold move for the Wall Street firms to become strategic investors and to provide the capital Ping An needed to maintain its required reserves and its fast pace of growth. The investment made Ping An the first Chinese insurer with foreign shareholders and it was one of the first private equity investments in a Chinese company. The banks eventually owned a combined 13 per cent of Ping An, for which they paid US$70 million. There was no precedent for such a transaction and so to establish some kind of shareholder representation they went to the General Agreement on Tariffs and Trade (GATT) summit in 1993 and obtained special ‘observer’ status for themselves on Ping An’s board.

With foreign investors onboard, it was time for Ping An to upgrade its corporate governance. The foreign investors brought not only the capital injection that Ping An needed to expand its operations but also insights into the value of Western corporate governance. New risk control and investment committees were formed and the Group hired an international foreign auditor to aid transparency and introduce international best practices.

Ten years later, both banks earned 20 times more than the investment value. In return, Ping An learned about business management, investment, and international governance practices, helping to lay a solid foundation for the future of the company.

Learning these best practices helped Ping An to bridge the river quickly, but the company needed more help and international expertise to develop.

In December 1996, Peter Ma brought in international management consultancy McKinsey to look at the company structure, operating systems and processes. Both the life and non-life businesses were growing fast. The company had been operating on a decentralized entrepreneurial model. With McKinsey’s help, a new centralized management structure was put in place, with staff incentivized by key performance indicators (KPIs) to instill performance and value-based metrics in the employee culture and operations.

Around this time, American insurance company Prudential received a license to launch investment-linked products to China. The products were very successful. Peter Ma was keen to learn about this product innovation and sought help from the company. Prudential agreed to train Ping An staff and in 1999, Ping An was the first domestic insurer to launch investment-linked products in China. A year later, Ping An was the first domestic insurance company to launch regular premium products. Until then the insurance contract was based on a lump-sum payment of the premium. This initiative transformed the business and within five years, it made up 90% of total life premiums.

Peter Ma knew the employee was the cornerstone of company development and maintaining Ping An’s strong growth. In 2000, to embed the new corporate culture of performance and innovation, and bridge the river faster, Peter Ma began international recruitment of top senior management, seeking the help of the Swiss executive placement company Egon Zehnder International. The new hires added international experience and experience in foreign practices, such as asset-liability management and policy persistence. They proved crucial to Ping An’s growth.

As McKinsey’s former Managing Partner Dominic Barton commented at the time, as far as he was aware, “amongst all the Chinese conglomerates, Ping An has the most comprehensive performance culture, comparable to [many] global enterprises.”

Today, 60% of Ping An’s top 100 senior leaders have been recruited from abroad. They keep the Ping An spirit of professionalism and innovation and continue to grow the company. A new 143-page corporate culture guide was produced detailing the history of the company’s culture and provided every employee with guidelines on its values. There was a written exam for the top management on it to ensure it was truly learned and understood.

Soon Peter Ma realized if Ping An was to continue to grow and innovate, it needed to reach beyond insurance and become a truly integrated financial services platform and enter the big league of international listed companies.

Through the 1990s, Ping An expanded into non-insurance financial businesses. It got a significant boost in 2002 from HSBC, one of the largest financial services groups in the world at the time, with strong ties to China.