Ping An’s Singaporean force on scaling, new business models and the importance of culture and people 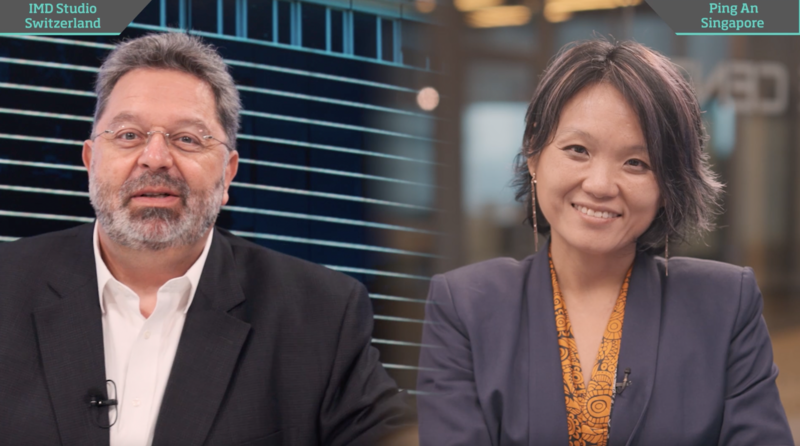 Ping An Group is one of China’s most powerful private businesses. Since its founding in 1988, it has built itself into Asia’s largest insurance company, selling US$110 billion of insurance premiums last year.

Headquartered in Shenzhen, China’s top technology hub, it has also established itself as one of the country’s leading digital innovators, especially in the areas of fintech and artificial intelligence.

The breakthroughs at the world’s second largest insurance company by market capitalization are striking. One is an expert interview tool which can recognize 54 different micro-expressions – among them ones which indicate a loan applicant might be lying. “We were able to reduce about 20% of risk this way,” says Tan.

Another is AskBob, a cardiovascular disease management app that outperformed specialists in a competition held in Beijing in 2020 and is now used by nearly a third of China’s 3.8 million doctors. This is a world away from the firm founded three decades ago, when China had no life insurance industry; today, the company has nearly 1 million staff and around 220 million customers, most of whom are in China, and portfolio companies spanning automotive and financial services, plus healthcare and smart city solutions.

The key figure driving some of the most innovative digital developments is Jessica Tan, one of Ping An’s three co-CEOs.

Her rise to the top of company followed five years later, along with responsibility for its insurance and technology arms, and the task of integrating the two.

Tan attributes Ping An’s success to three factors. “The first one has to be that we grew with a large, homogeneous market. In the past 30 years, China’s growth has been spectacular — we were very lucky in having been founded 34 years ago.”

“Factor number two is that we have a very entrepreneurial culture. The whole company is very aggressive, very innovative, always thinking about what’s next to ensure that we continue to grow,”

Ma Mingzhe, Ping An’s founder, continues to be involved in the running of the company as group chairman. “He’s not content with just steadily growing our core business, but is constantly thinking where our next five and 10 years of growth will come from and how to start cultivating that,” says Tan.

“And the third factor is its people. Compared to many other companies, Ping An has a very open and embracing culture – myself being a perfect example. I’m ethnically Chinese, but I’ve been three generations outside of China. I was born and raised in Singapore.”

“There are lots of executives here like me. Our top 100 executives include many non-ethnic Chinese – Koreans, Americans, all sorts of nationalities.”

That combination of China’s scale, entrepreneurial restlessness and an open culture willing to embrace contributions from anyone, regardless of their background has seen Ping An move across a three-stage trajectory since Tan joined.

The starting point was looking at ways in which technology could be used to strengthen Ping An’s core business – financial services – by improving sales, cutting costs or reducing risk. “Our thinking was that, as the margins in financial services become thinner, so technology needed to play a bigger role in enabling us to scale up,” says Tan.

One target was the 14 million car accident claims the company handles annually. “Because China has 20,000 different car models, we used to need to send people to look at each car,” says Tan. The near-universal adoption of smart phones, however, offered Ping An another channel to explore – using AI technologies to analyze images of damage.

“Now, drivers can use their phone to take a video or some pictures, send it to us and 72% of claims will be automatically recognized and handled by our AI models,” says Tan. “Then, either we pay you immediately or you go to our repair shop and we guarantee that [the cost] will be within a certain amount and we’ll pay for it.”

The second stage came when Ping An realized that some of the technologies it had developed could be used to create new business models. Across four areas — personal finance, health care, automobiles and ‘smart city’ services (a blanket category covering everything from paying your bills to elderly home care, explains Tan) – Ping started putting in place ecosystem apps aimed at helping people meet their everyday needs.

One of the first was Ping An Good Doctor, now one of China’s largest mobile health portals. Another is Autohome, the country’s largest auto-services portal.

Total user number of those apps now stands at just under 650 million, up from 50 million just five years ago, and providing a company with a massive stream of customers for its financial services.

The third stage came when Tan realized that various of those ecosystem business, instead of only serving Ping An businesses, could also be made into companies in their own right, selling their services to other companies.

“Internally, of course, at the beginning, there was a lot of debate and resistance, because, clearly, you’re selling to competitors,” says Tan. But pressed by Ma Mingzhe to put aside such short-term concerns and instead think of longer-term sources of growth, Tan pressed on, most notably with OneConnect Financial Technology, a technology-as-a-service platform for financial institutions originally set up to meet the needs of its own businesses. Listed on the New York Stock Exchange in 2019, OneConnect now sells its services to all China’s major banks and more than half of the country’s insurance firms.

“Of our 11 tech companies, four of them are now separately listed companies,” says Tan. “Now we think of technology as a business in itself.” Last year, those companies contributed nearly US$12 billion in revenues last year and about US$2.2 billion in profits, about 7% of Ping An’s total profits.

“It took a lot to make this work,” says Tan. “When I started, in my first two or three years at Ping An, because I was running all these innovations I constantly had to justify why we were investing all this,” says Tan.

“Just after I joined the company, in the first period when we started a lot of these tech businesses, we hired a lot of non-financial services folks. Every quarter we’d have a Saturday with all the top guys from these various companies with a whole day discussion on a topic. It was a real pain. There were all sorts of different opinions, lots of quarrels and stuff. “

Working out the kinks took two or three years. “The key to doing that was one thing we’re now always consistent about, which is whenever we get together to do something, we’re always very target- and outcome-oriented. We make the whole team, regardless of which [Ping An] company they’re from, have a joint target. Then if we failed, all of us failed, and if we succeeded, we succeeded because we all believed that frictions are best solved through working together through very challenging things until we emerged victorious at the end.”

Tan’s personality plays an important in all this. “Most of my teams know I have two characteristics that are very distinct,” says Tan. “Around work issues, I’m unforgiving in many cases. I’m very aggressive. I ask a lot of questions. I’m very numbers driven, and I chase for what I think is the right answer.”

Simply aiming to do better than last year isn’t the kind of improvement in performance that impresses her.

“Perhaps this is the McKinsey in me. I was trained for 13 years to think like this. What is the right answer? What’s the maximum value? I tend to be very resilient in trying to get to what I think is the right answer for the business, for the organization.”

“I don’t have flowery language,” she says. “My Chinese colleagues at the beginning thought my language was very direct. I would joke and say it’s because my Chinese is not that great. “But people started to accept that I didn’t mean to target individuals, but I really just wanted to find the right answer.

“As long as you know we’re facts driven, you’ll do fine by me and we’ll work together very well,” says Tan. “That doesn’t mean that I don’t care about individuals. I do really care about making sure that if doing the right thing for the organization naturally means doing good for the individual.

“For my top 200 people. I know them individually/ I write them handwritten birthday cards every year, and they can reach out to me any time they want to talk about their development,” says Tan. “I try very much to chart development for them. I will give feedback directly. After a meeting sometimes I will pull the person aside or call them and say, ‘I think you should have done better here or there.’”

Tan recognizes that working at Ping An can often be tough — “because we are so driven.” Yet she also sees it as organization that both rewards and respects its staff’s needs. “I would like it to be rewarding not just for the organization, but for individuals who also have ambitions and who want to achieve something.”

This may require some introspection. Ask: “What are you chasing for? If you’re just looking for a job, 9 to 5, then going back home, then probably this is not the place for you. But if you’re somewhere where you want to do something meaningful with that time, then it doesn’t matter what are your own priorities – we can work around them.”

In her case, those include family time: “Before COVID – no weekends in Shenzhen; I have to be back in Singapore. My family’s in Singapore, and you have to respect that,” she says.

Tan is also clear about her own role: “At my level, as a co-CEO, my impact comes from motivating people to do the right things. As a leader, you need to set the right direction, make sure that we’re getting the right answer and not having people all doing something that’s wrong – that’s the analytical me.

“But you also have to find the right people — because they’re the ones who do it. And, most important, you’ve got to motivate and influence them, get them to do the right thing.  Then, the next time, you all make fewer mistakes, you’ve learned to be wiser. I think that’s what holds people together. This is something I will continue for decades to come.”